When a parent is asked how their weekend was and they say “GREAT!” they are lying half the time. I know this because I did it this morning. Unless you are the patron saint of patience and kids screaming “NOOOOOO you DON’T say that to ME” and swiping punches in the air and throwing sharp objects at you then slamming doors for three days doesn’t bother you, and sleeping in is no longer a wish and dream, and meals aren’t avoided simply because you don’t want to clean up afterwards, then congratulations you are a parent.  Even the best of us with the best intentions get lost in a big way sometimes.

Last Friday my husband and I took a vacation day from work to take the kids to Ringling Bros. and Barnum & Bailey Circus. We wanted to expose them to something new and exciting; tigers getting their belly scratched, clowns falling off ladders, eating salty popcorn, sitting in a big amphitheater watching motorcycles weave around each other in the metal sphere of doom. We had every intention of enjoying our big day off! We bought three tickets for the circus assuming Everett would happily sit on our lap. Five elephants came out on stage and then just as quickly disappeared before a ring leader in sequins sang a terrible song that didn’t stop for 10 minutes. Everett got antsy, and was happier running down the ramp in the abandoned concessions area away from the crowd while mommy pretended to be a tiger. Never mind that there were real tigers not 100 feet away that we had paid $50 to see. Asher was over-stimulated and thrown off by the lack of focus of the show. He wanted to sit in my lap and talk gibberish. He acted like he hadn’t slept in days, and it was only 10:00am. The popcorn made him insatiably thirty. A bottle of water cost $5 and the straw wasn’t long enough to stick out the bottle mouth. In the end we got use out of one ticket. For half the show. They both screamed at intermission that they were starving but they didn’t want to eat anything. As my husband left the theater carrying a screaming Asher in a fireman’s hold, I distracted Everett with airplanes in the sky as though that were part of the big show. And that was only Friday.

We recently signed up for Sitter City in search of a babysitter for sanity breaks and had scheduled the whole day on Saturday to be home for interviews. Two were a no-call no-show, and one cancelled at the last minute. By 2:00pm the house was a mess and I felt a vague sense of panic. We went out for an early dinner thinking getting out of the house would be key. A walk in the dark to a restaurant would be fun! Asher does not understand Daylight Savings. He’s 4. He was scared. “I CAN’T SEE ANYTHIIIIING!!” At dinner, everything was thrown on the ground; toys, food, crayons, my phone. We smiled embarrassedly at restaurant customers, but not too much so because we spend enough money at this restaurant for family date night. I chugged a martini, Robby choked down dinner, and we rushed home for another two painful hours of alternating moments of sheer joy followed by welting tears of unhappiness with two zombie children. At bedtime, we were speechless.

On Sunday, we actually spent a lovely morning with my husband’s family. The kids were flirty, joyful, conversational and sweet. They ate lunch nicely at the table, they engaged with the adults. We thought this was a good sign. We thought we would let them nap in the car while I did grocery shopping. That was a mistake. By the time 4:00pm rolled around and I started my cooking for the week, these two no-nap children and a husband who has been complaining of stomach pain for 2 weeks now were just gearing up for 4 hours of hell. Asher wanted every baby toy, Everett wanted to cling on my leg while I poured a steaming hot pot of water down the sink, no television show would satiate both children, the chocolate ice cream had melted in the box because it got left out of the freezer for too long since grocery shopping, so mommy had made an empty promise. I pulled a lasagna out of the oven while Everett ran for the open oven door with extended arms. The joint screaming of the kids got louder to a pitch range that I did not know existed to human ears.

In moments like this, you are lost. You wish you could just walk away. That you could hand a bad situation over to someone and scream HELP ME. But you can’t. There is no one. You have to push through. And then at 9:00pm when the house is finally quiet, you get your husband who fell asleep in your child’s room out of sheer desperation and exhaustion and you just go to bed. You are defeated. There is nothing left to say. In the morning, the kids will wake up refreshed and happy and clueless to reality. And you tell the teachers you had a great time at the circus and Asher proudly says he saw dinosaurs. Because that’s what you do.

You know how sometimes small tasks make you feel better because you can cross them off a list? This morning after I dropped off the kids at school I threw away a few boxes of garbage, I cut off  tags from new clothes, and I cleaned out the coat closet. And you know what? I am feeling better. I have my lunches ready for the week. And I actually can’t wait to see those damn kids again when I pick them up from school at 5:30pm. I love them so much, I lie. But only half the time. 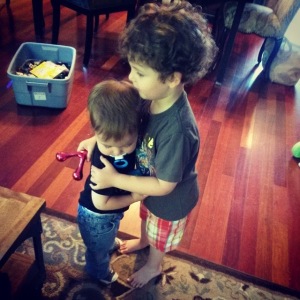 6 thoughts on “Parents are Liars”