Some of my favorite meals are those that consist of 10 ingredients or less. Today’s recipe is a simple fresh pad thai dish that features wide rice noodles in a light, creamy peanut sauce. In all this dish takes about 30 minutes to prepare and is best served family style.

Add coconut milk, peanut butter, lime juice, soy sauce and ketchup in a medium bowl and mix well for creamy peanut sauce. Prepare rice noodles according to package directions, typically boiled around 10 minutes then rinse under cold water to prevent noodles from overcooking. Mix noodles with peanut sauce in a large serving bowl, then top with heaping pile of diced napa cabbage, cilantro, green onions and chopped peanuts. I also added a package of baked tofu for some added protein. It really is that simple! Add spicy thai sauce if desired. Thanks to our special guest Frank Villella for this week’s cooking party!

The only way to live to the fullest is to appreciate every moment in the present. Never regret the past, never doubt a decision in momentum, and seize every opportunity as they present themselves for your future. We are all here to learn how to rise above triviality and self-inflicted suffering. Order is a means to achieve a balance. Obviously, I’m feeling inspired after a day-long Buddhist retreat this past weekend where I basked in the glow of 2 hours of silent meditation! In writing this post I realize that cooking is my own means of meditation. And so today I share a truly simple recipe for Soyrizo Burgers that can be made in large batches and frozen. I used an egg to help them stick together but you can easily substitute 1 tablespoon of flax seed oil and 3 tablespoons of water. For the photo I actually used Upton’s soyrizo seitan which did not stick together as well as the other brands.

Pulse all ingredients in a food processor until beans are small pieces. Do NOT purée unless you like to eat baby food! Form 3″ patties about 1/2″ thick. Pan fry in a small amount of vegetable oil about 3 minutes per side. Serve on a whole grain bun with plenty of avocado or fresh guacamole.

10 Things You Should Know about Being a Working Mom:

1. Coming home from work is actually when the hard work begins
2. Your Kate Spade will soon become affectionately known as the “snack bag”
3. There may come a day when you steal a roll of toilet paper from work because you’re down to half a roll between 3 adults and 2 kids and you just need to get through the night
4. What’s the point in a manicure since they only last a day?
5. You will frequently be getting into bed for a “nap” at 4am before getting up for work an hour later
6. Waist-high shared lukewarm baths with your toddler every night does not constitute a proper adult shampoo
7. Rewards cards now seem magical, especially since you will be buying new shoes every 4 months and no they are not for you
8. You now have “at home” clothes and “outside world approved” clothes. If you know people that have seen you in both then they are indeed a true and beloved friend.
9. You will be buying odd tomatoes that have been thrown in your grocery cart on Saturday mornings that you’re too embarrassed to put back
10. You can never have too many Goldfish crackers. Ever.

This week I was in the mood for a traditional hot ratatouille, but with a nontraditional twist of protein. This Lentil Ratatouille features a creamy braised eggplant and an earthy bite from the lentils. It can be eaten as a hearty stew or served atop any variety of pasta for a delicious dinner entree!

In a medium pot, boil 2 cups of water then add the lentils, bay leaves, and thyme. Reduce the heat to a gentle simmer then cook uncovered for 20 – 30 minutes. In large pot, cook olive oil, onion and garlic on medium heat until the onions are translucent. Toss in the eggplant and cook 5-7 minutes, stirring occasionally. Add zucchini and cook with cover on pot for additional 5-7 minutes, stirring occasionally. Add marinara and fresh basil and simmer for an additional 15 minutes, stirring constantly. Remove bay leaves from the lentil mixture, then add the lentils to the ratatouille mixture and serve hot.

I often make grilled vegetables for the week to enjoy with pasta or salad, but it never occurred to me until this week to puree those grilled vegetables into a soup base and then pour that over a grain base to make a yummy stew. WHOA MAMA! Imagine the possibilities. It all started with this amazing recipe for a Mexican flavored vegetable soup with quinoa from Reboot with Joe which I altered slightly just because it is literally impossible for me to make a recipe without changing it somehow just for the hell of it. And now that the seed has been planted, I am definitely going to experiment more with spices, flavors and grains. This soup is hearty, sweet and spicy, and makes a nice substitute for the usual chili. 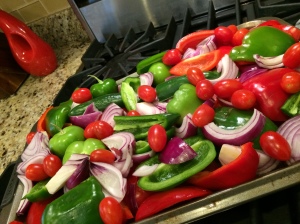 Preheat the oven to 400 degrees F. Discard all stems and seeds from the peppers (if you want it spicier leave in jalapeno seeds). Roughly chop field peppers and onion. S[read whole garlic in peel, whole tomatillos, cherry tomatoes, onion and peppers onto baking sheet. Drizzle with olive oil and roast until pepper skin is soft, about 15 minutes. While roasting, heat broth in pot. Remove baking sheet from oven. Peel garlic and place all vegetables into broth, and add half of the corn and beans. Blend with a hand blender until smooth. Add remaining corn and black beans, stir, and let simmer for 10 minutes. Serve over bed of quinoa and garnish with chopped scallion and cilantro.

Wikipedia moment! Apparantly, the same person who invented the graham cracker was also a major catalyst in the vegetarian movement. Reverend Sylvester Graham (July 5, 1794 – September 11, 1851) was an American dietary reformer who, around 1829, invented the Graham Diet – which consisted mainly of fresh fruits and vegetables, whole wheat and high fiber foods, and excluded meat, milk and all animal byproducts in an effort to purify our mind and body. Graham was also amongst the first to argue that chemical additives used to make bread whiter in color and more commercially appealing also made it unwholesome. Well at least that was a far cry from 1590 when the city of Paris actually declared it legal to use the bones of dead Parisians to be ground into flour and baked into bread during the famine!

Unfortunately, Graham also believed that vegetarianism was essential to an asexual lifestyle, and that consuming animal byproducts caused sinful lusts. So next time you feed your toddler a graham cracker just remember that it was invented as a substitute for sex!

Today I am invoking my inner free love hippie and sharing a rather pleasant recipe for Quinoa Granola.It’s mild cinnamony sweetness combines well with the tartness of the dried cherries and the nuttiness of the quinoa and almonds.

Preheat oven to 350 degrees. In a large bowl, stir together oats, quinoa, almonds, honey, coconut oil, salt and cinnamon until combined. Spread the mixture out on a foil- or parchment-lined baking sheet. Bake for about 20 minutes, stirring once halfway. Remove and let cool, then stir in dried fruit and toss to combine. Serve immediately or store in a sealed container for up to 2 weeks.